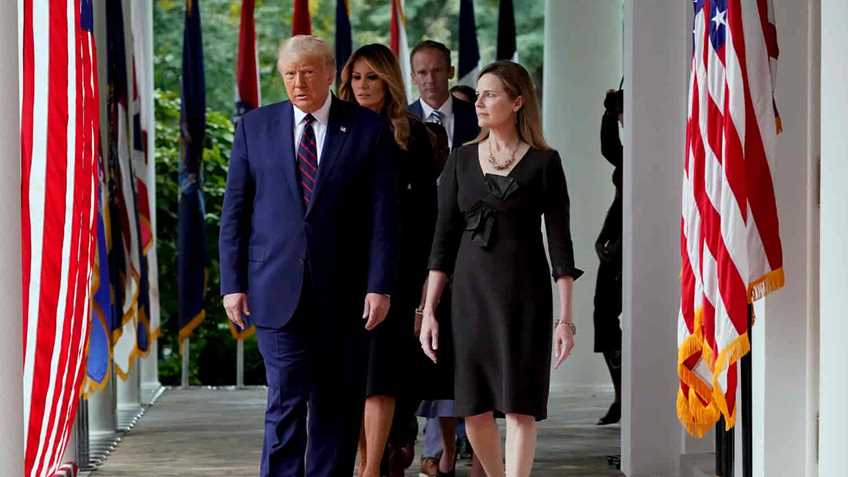 Judge Barrett was previously nominated by President Trump to the U.S. Court of Appeals for the Seventh Circuit and confirmed in that position by the Senate three years ago. During her tenure on that court, she has participated in deciding over 900 cases.

A 65-page questionnaire completed by the nominee, outlining the details of her academic and legal career, published writings, and more, has been released by the Senate Judiciary Committee. Asked to choose her ten “most significant cases,” Judge Barrett listed her dissent in a Second Amendment case,  Kanter v. Barr (7th Cir. 2019), as her most important ruling.

Her choice is a telling one, as the other cases on her top-ten list cover critical issues like  qualified immunity, employment disability and hostile work environment claims, and the interpretation of federal immigration laws.

A review of her dissent in the Kanter case reveals both a thoughtful and considered approach to Second Amendment jurisprudence and a respect for the right to keep and bear arms.

Kanter arose out of a challenge to “felon dispossession statutes,” being federal and state laws that prohibit a person with qualifying criminal convictions from possessing or receiving a firearm. The federal firearm disability is permanent unless the person has been pardoned, the conviction is expunged or set aside, or the person has had their firearm rights restored. However, the mechanism for restoration of rights based on a federal conviction has been unavailable since 1992, when Congress suspended funding for the program.

Defendant Rickey Kanter operated a company that sold therapeutic shoe inserts, including inserts that had been rejected by Medicare as noncompliant with its standards. Kanter was convicted of federal mail fraud, a felony, after falsely marketing the noncompliant inserts as Medicare-approved.

Once convicted, despite being a one-time, non-violent offender with no history of violence, firearm misuses, or subsequent convictions, Kanter remained barred under both Wisconsin and federal law. In his as-applied challenge, he argued this was an unconstitutional violation of his Second Amendment rights.

The two-step analysis used by the Seventh Circuit required an initial determination of whether the law regulates an activity falling outside the scope of the right as originally understood; if so, the activity is unprotected by the Second Amendment. Otherwise, if the historical evidence is inconclusive or indicates the activity is not categorically unprotected, the next step uses some level of judicial scrutiny to evaluate the regulatory means used by the government against the public benefit objective asserted as the reason for restricting Second Amendment rights.

Two of the three judges on the panel opted to sidestep the “difficult issue regarding the historical scope of the Second Amendment,” and instead decided the case by focusing on the means-end scrutiny. Applying the fairly undemanding level of intermediate scrutiny, the majority upheld the law after concluding that prohibiting even nonviolent felons from possessing guns was substantially related to the government interest in preventing gun crime.

Judge Barrett’s dissent carefully examined Founding-era laws regarding felonies and the consequences of a conviction. Despite the government’s assertion that “the historical record supports the conclusion that felons are not entitled to Second Amendment protection,” she found that traditionally, felons serving a term of years had their rights suspended but not extinguished. Status as a convicted felon alone could not support a “permanent and pervasive” loss of firearm rights. Further, the government failed to show how disarming the “immense and diverse category” of non-violent offenders like Kanter (or Martha Stewart) was closely related to the goal of protecting public safety, or how Kanter’s own personal history was related to that interest. All in all, Judge Barrett concluded that the relevant focus was dangerousness: legislatures could disarm those who had demonstrated a proclivity for violence or who would otherwise threaten public safety, but could not completely deprive nonviolent felons of the right to possess arms solely because of their status as felons.

Supreme Court Justice Clarence Thomas has regularly disparaged (here, here and here) “the lower courts’ general failure to afford the Second Amendment the respect due an enumerated constitutional right.” Faced with a nominee who recognizes the importance of the fundamental right to keep and bear arms, gun control advocates have responded with panic and scaremongering. During the recent vice presidential debate, Senator Kamala Harris (D-CA) was asked point-blank whether a Biden administration would resort to “court-packing” if Judge Barrett was confirmed to the Supreme Court, and refused to give a responsive answer.