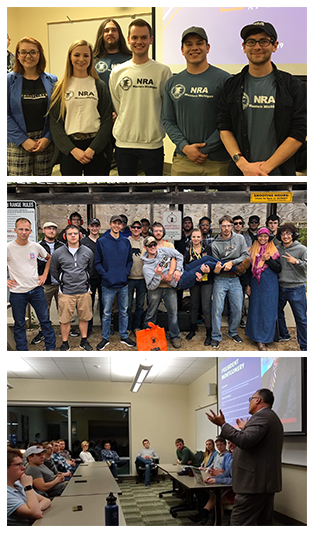 The NRA Collegiate Coalition at Western Michigan University recently wrapped up another stellar year on campus in support of the Second Amendment. The group, founded in 2017 by Grant Van Dorn and Cory Gardner, provides a unique and special opportunity for students. The group was started with the goal of providing a place for student Second Amendment advocates to gather on campus to discuss ongoing issues surrounding firearms and the shooting sports, but also to provide a casual and inclusive environment to welcome others to come learn more about NRA, the Second Amendment, and the gun debate.

Shooting and training opportunities were also paramount for the group as they hosted various events for students at the local gun club to learn more about shooting and to refine their skills. They also worked within the community to promote the NRA Collegiate Coalition at Western Michigan University by attending local gun shows and working within the pro-gun community to garner resources in hopes of further building the group for the future.

All Eyes on Georgia – Your NRA is on the Frontlines