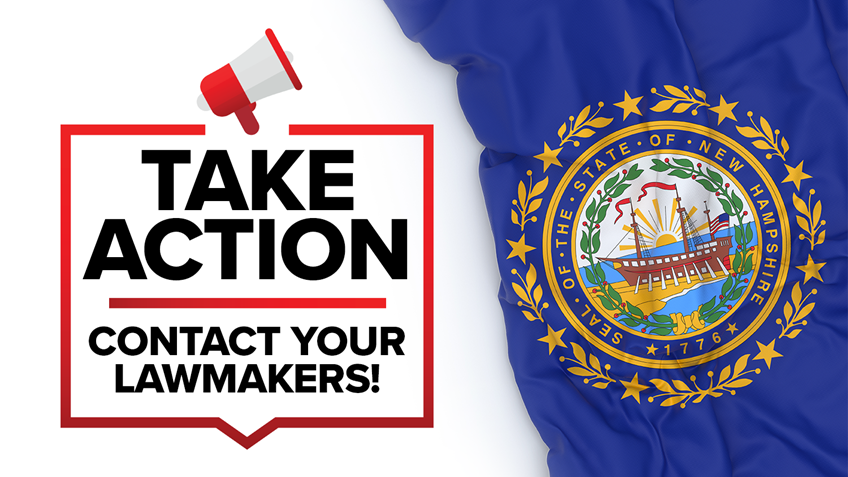 On ​May 23rd, the New Hampshire state Senate will be holding floor votes for a number of bills that would impact our Second Amendment rights, including legislation to criminalize the private transfer of firearms, impose waiting periods, increase arbitrary boundaries where law-abiding citizens are left defenseless, and take away the constitutional rights of individuals without due process.

House Bill 109 would essentially ban the private transfer of firearms.  It would employ a broad definition of "commercial sales" that would require private individuals, such as collectors and hobbyists who attend gun shows to trade firearms among each other, to conduct their transfers through Federal Firearm Licensed (FFL) dealers.  The exemptions in the bill for private individuals not attending gun shows are so narrow and this definition of "commercial sales" is so large that they are effectively useless.

This is a solution in search of a problem.  Federal law already requires firearm dealers, regardless of location, to do background checks when transferring firearms.  According to federal studies of how prison inmates acquired firearms, fewer than 1% reporting acquiring them at gun shows, and the vast majority acquired firearms on the black market, by straw purchase, or theft.  In addition, ATF has reported that nearly half of illegally trafficked firearms originate through straw purchasers alone.

House Bill 514, as amended, would delay Second Amendment rights by requiring a three day waiting period (excluding weekends and holidays) before an individual may receive firearms that they purchase.  There would be limited exemptions, such as for those who have completed the 16 hour hunter safety course and are seeking to buy a long gun.  The original version of the bill would have imposed the waiting period for seven days, excluding weekends and legal holidays, and included ammunition as well, but those provisions have been amended out.

Waiting periods are an archaic relic from before the digital age, since they were originally meant to give local law enforcement time to complete background checks.  Since the National Instant Criminal Background Check System (NICS) came into operation in 1998, technology has allowed background checks to be done instantly, activating the law that eliminated the federally required waiting periods.  There is no evidence that waiting periods reduce suicides.  A waiting period would not deter or affect criminals, as they obtain the vast majority of their firearms from illegal sources.  It would especially affect first-time buyers seeking a firearm for self-defense, as it would be a three working day delay where they and their loved ones are left defenseless.

House Bill 564, would prohibit law-abiding citizens carrying firearms for self-defense from going onto school grounds except when picking-up or dropping-off students and the firearm remains in the vehicle.  This would burden law-abiding citizens by requiring them to unnecessarily handle firearms that are already securely holstered and leave them in the vehicle when exiting.  In addition, the exemption to leave firearms in vehicles would not extend to going onto school grounds for other purposes, such as attending events, filling out school paperwork, or meeting with school officials.  Parents would have to deviate from their normal routes to leave firearms at home or to park off-campus.  So called “gun-free zones” simply disarm law-abiding citizens and leave them defenseless against the criminals who ignore such arbitrary boundaries.  School safety is of the utmost importance, but restricting the rights of law-abiding New Hampshire citizens won't result in increased school safety.

House Bill 696, would violate an individual's constitutional rights and allow for the seizure of firearms with an ex parte order absent due process and without regard for the basis of the order.  Further, law enforcement would be immune from liability for any damage done to the firearms they seize.  If an order expires, an individual would have to go to court to have their constitutionally protected property returned to them, unlike when the court may have seized the property wrongfully.

Washington: Lawsuit Against I-1639 Proceeds After Motion To Dismiss Denied