The problem with what the president is doing is that he’s not simply posing a danger to the constitutional system. He’s becoming the very danger the Constitution was designed to avoid.”

That definition of Barack Obama’s presidency—made by Georgetown University law professor Jonathan Turley—sums up Obama’s latest gun control by edict that will create whole new classes of felons out of peaceable, law-abiding citizens.

Obama’s January 2016 announcement of his series of unconstitutional executive actions designed to bypass Congress includes setting into motion plans to disarm Social Security recipients who require assistance in managing their financial affairs. It could affect hundreds of thousands of elderly Americans.

But the centerpiece of this power-abuse nightmare is Obama’s scheme—under the guise of expanding background checks—to criminalize transfers of firearms between individuals who do not obtain a federal firearms license.

Obama laid out this attack without any specifics, as details will be written by legions of lawyers and thus may change.

Furthermore, the administration is saying that the “sunshine” strictures of the Administrative Procedures Act, requiring publication and public comment on new or changed regulations, don’t apply to Obama’s edicts, claiming such proclamations are merely “guidance.”

Under the U.S. Constitution, laws can be enacted only by the Congress, but with Obama’s royal hubris, he is altering those statutes wholesale, creating changes that will send innocent people to prison.

In Obama’s world, ordinary citizens transferring firearms under what today are perfectly legal circumstances would be required to obtain a federal firearms license or face federal prosecution. Such a license could open your doors to unannounced federal inspection of your home. The constitutional welcome mat saying “Get a Warrant” will no longer exist if you own guns.

Consider that it is already a federal felony to knowingly transfer a firearm—any firearm, anywhere—to a prohibited person: felon, fugitive from justice, adjudicated lunatic, drug dealer, etc. And equally, it is a felony for such persons to obtain a firearm or possess a firearm. Real criminal commerce in firearms couldn’t be any more illegal than it already is. So this isn’t about crime; it is about instilling fear, intimidating the law-abiding and ending legal commerce.

So what turns an individual gun owner into an illegal “dealer” subject to arrest and prosecution for not obtaining a license. How many gun transfers would turn an ordinary unlicensed person into a felon?

As reported in the Washington Free Beacon, Obama’s Attorney General

Loretta Lynch opined, “It can be as few as one or two depending upon the circumstances under which the person sells the gun.” As for who will be prosecuted, Lynch said, “We will be looking for those individuals who seek to avoid registering.” (Emphasis added.)

An Obama adviser, Valerie Jarrett, took it further: “ATF will make clear that whether you are ‘engaged in the business’ depends on … factors such as: whether you represent yourself as a dealer, such as making business cards or taking credit card statements; whether you sell firearms shortly after they’re acquired; or whether you buy or sell in the original packaging.”

Will a “new” or “in the box” sale define you as an illegal, felonious dealer with nothing more?

In truth, the black letter of the law clearly defines who is engaging in the business as someone who “devotes time, attention and labor to dealing in firearms as a regular course of trade or business with the principal objective of livelihood and profit through the repetitive purchase and resale of firearms.” And it exempts “occasional sales, exchanges, or purchases of firearms for the enhancement of a personal collection or for a hobby.”

That definition was a hard-fought, carefully constructed reaction to years of ATF and Justice Department abuses against citizens in the past.

For those of us old enough to have been in the bipartisan fight to stop the massive civil liberties excesses of ATF and Justice Department in the 1970s and 1980s—where thousands of innocent gun owners were arrested and prosecuted for “engaging in the business without a license”—we know that with Obama, the past will be the future.

With massive support from gun owners, led by the NRA, Congress enacted the Firearms Owners’ Protection Act of 1986, and it stopped the “engaging in the business without a license” abuses cold.

So here it is, 30 years later, Obama and his axis of gun banners would restart that engine of wrath against ordinary law-abiding Americans. We must stop them in their tracks.

It is imperative that you contact your senators and representatives and tell them to stand and fight to end Obama’s executive decree war on the Second Amendment.

Allan Cors is the President of the National Rifle Association of America.

More About This Contributor
UP NEXT x 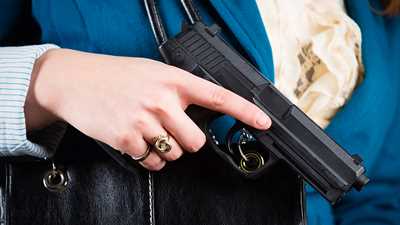 Maryland: Another Week Ahead of Committee Hearings for Gun Control Legislation